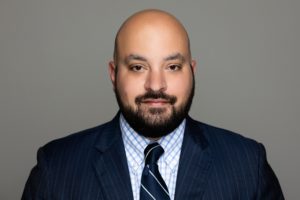 When healthcare providers, C-suite executives, elected officials, fellow attorneys, and even sitting judges need legal representation in high-stakes criminal and civil matters, they have turned to Scott Grubman.  Scott is a former Assistant United States Attorney (AUSA) and Department of Justice Trial Attorney who represents businesses and individuals across a wide variety of industries in connection with government and internal investigations, False Claims Act litigation, and white collar criminal defense.

Although Scott represents clients across industries, a substantial portion of his practice involves representing healthcare providers of all types and sizes in connection with high-stakes government investigations – both criminal and civil – by agencies such as the U.S. Department of Justice, HHS-OIG, the FBI, and state Medicaid Fraud Control Units.  Scott also has extensive experience representing healthcare providers in connection with administrative proceedings, payor audits, and general healthcare regulatory matters, particularly those related to the False Claims Act (including qui tam whistleblower actions), Stark Law, and Anti-Kickback Statute.  He has represented healthcare clients ranging from multi-hospital health systems to individual physicians, ancillary providers, and every type and size in between.  He served as lead trial counsel in Georgia’s first-ever False Claims Act trial, which resulted in a favorable settlement after 4 days of testimony.

In addition to his healthcare clients, Scott also regularly represents clients who are being investigated for, or who have been charged with, white collar crimes, including fraud, embezzlement, theft, and public corruption.  He has first-chaired numerous criminal and civil jury trials in both federal and state courts, and has handled criminal and civil appeals.  Scott is skilled and experienced in handling high-profile investigations as his matters have garnered substantial attention by the international, national, and local news media. He has also represented individuals in connection with Congressional investigations, including the representation of a key witness before the Select Committee to Investigate the January 6th Attack on the United States Capitol (the “January 6 Committee”).  Scott has a reputation for passionately defending his clients both inside and outside of the courtroom.

After graduating from law school with highest honors and then clerking for two federal judges (both U.S. District and U.S. Circuit Courts), Scott was accepted into the Attorney General Honor’s Program, first serving as a Trial Attorney for the U.S. Department of Justice in Washington, D.C., and then as an AUSA in Savannah, Georgia, where he investigated and prosecuted healthcare and other white collar fraud cases, and was a member of his district’s Healthcare Fraud Task Force.  He also represented the United States as lead counsel in dozens of cases in both federal District Court and before the Eleventh Circuit, including felony criminal investigations and prosecutions, criminal and civil appeals, habeas, constitutional claims, and asset forfeiture.  He was awarded a Special Commendation by the DOJ, and was recognized by HHS-OIG for his government service.

Scott has published dozens of articles on healthcare fraud and white collar crime topics in nationally-recognized journals and publications, and regularly presents at healthcare and white collar crime conferences and seminars nationwide. He  serves as an Adjunct Professor of Law at both Emory University and Georgia State University law schools, where he teaches courses on white collar crime and healthcare fraud and abuse.  Scott has helped to train lawyers on trial advocacy skills both domestically and internationally, including serving on the faculty of a week-long NITA trial advocacy training program in Lagos, Nigeria.  He also serves in leadership positions in state and national organizations, including the American Health Law Association (AHLA), the Federal Bar Association, the American Bar Association, and the State Bar of Georgia.  He has been quoted by both national and local news organizations on issues related to healthcare fraud and abuse and white collar crime, including the New York Times, Washington Post, Wall Street Journal, Bloomberg, MSNBC, and the Atlanta Journal Constitution.